If you thought Ecuador’s coastal cities were lacking beauty, come to Bahía de Caráquez (pop. 29,000). This relatively small city is clean, quiet, and boasts a dramatic location—bright white apartments perched elegantly on a sandy peninsula jutting out of the mouth of the Río Chone into the Pacific. As recently as the late 19th century this was Ecuador’s biggest port, but the eroding sand banks moved that distinction to Guayaquil and Manta. What Bahía lost in commercial terms it gained in aesthetics, and these days it’s easily the most pleasant coastal city to spend a few days in. The streets are clean thanks to a comprehensive recycling program, many residents shun cars in favor of bicycles, including the taxi drivers, and the parks are well tended—if only every city in the country would follow Bahía’s lead. The longest bridge in Ecuador, over the Chone estuary, was opened in November 2010, improving access to Bahía and nearby Canoa.

Bahía, as it is called by locals, received relatively few visitors until the 1990s, when President Sixto Durán Ballén bought property here, and it seemed every government minister and wealthy Quiteño followed, squeezing white apartment blocks onto Bahía’s narrow tongue of land. Most of these apartments lie dormant outside the January–April high season, which adds to the air of tranquility.

It hasn’t always been tranquil in Bahía, however. The 1997–1998 El Niño climate pattern caused widespread landslides and washed away nearby roads. Just as the city was trying to recover, an earthquake measuring magnitude 7.2 leveled large areas of the city, mainly the rickety houses on the outskirts. Bahía was without electricity or water for months, and over 2,000 people were made homeless. After two such devastating events, the city has not just done a remarkable job of recovering, it has reinvented itself in far better shape. A group of residents led by Dario Proaño, who runs Río Muchacho Organic Farm, secured support to convert Bahía into the “eco-city” that it is today. The eco-drive continues, and city has recently banned all plastic bags and replaced them with biodegradable ones.

Bahía has a couple of noteworthy events—the parade of the Virgen de La Merced (Sept. 24) and the city’s canonization celebration (Nov. 3), with parades, dancing, and a gastronomy festival. Nightlife here is low-key—there’s only one disco in town, Dabei (Malecón, 8 p.m.–2 a.m. Fri.–Sat., $5) on the north side of the malecón in the Yacht Club. Alternately, head to nearby Canoa on weekends.

Find artisanal handicrafts along the malecón near the Yacht Club. Guacamayo Tours (Bolívar 902 at Arenas, tel. 5/269-1412) sells beautiful handmade paper, envelopes with pressed flowers, as well as T-shirts and other handicrafts. The city market (Morales and Ante) offers a wide variety of fruit, vegetables, and seafood.

For a coastal resort, Bahía actually has quite a small beach on the south side of the peninsula. The tide comes right in, and the beach gets crowded in high season, but it is beautiful, especially in the early morning. Note that it’s not advisable to swim on the north side because the Chone estuary is not clean. If you want a better beach experience, head to nearby Canoa.

The dramatic setting of Bahía is best appreciated from afar. The most convenient spot to take in the spectacular views is at the south end of town via the short hike up to the imposing Mirador La Cruz. Another good view is on the boat trip across the bay to San Vicente (the route to Canoa).

Colegio Miguel Valverde (Mejia), three blocks south of the market, has one of Bahía’s most-loved residents, a giant Galápagos tortoise named Miguelito, who lives in the grounds and can be visited daily. He has a seemingly insatiable appetite for bananas, so bring a bunch along to feed him, but watch your fingers.

The city’s museum, Museo Banco Central (Malecón and Peña, tel. 5/269-0361, 10 a.m.–5 p.m. Wed.–Sat.) is one of the best on the coast and well worth a visit. Highlights include tools from Ecuador’s oldest civilization, Las Vegas, dating from 8800 b.c., as well as gold pectorals, figurines, ceramics, and a lifesize model of a Manteño balsa raft. There is also an interesting history of the famously misnamed Panama hat.

There are several good tour operators in the city, the best of which is Guacamayo Tours (Bolívar 902 at Arenas, tel./fax 5/269-1412). Run by New Zealander Nicola Mears, the agency can set you up on all the best excursions in the area. There is an eco-city tour that includes the sights listed above plus a visit to Ecopapel to learn how paper is recycled by hand. Excursions go to the fascinating Río Muchacho Organic Farm (from $30 pp, depending on group size).

Another popular excursion is to Isla Corazón (from $25 pp), which includes canoeing through impressive mangrove tunnels and hikes on the island, which is home to one of the largest frigate bird colonies in South America. Watching the males inflate their chests to the size of a basketball to attract mates is entrancing. This tour can also be arranged with Ceibos Tours (Bolívar and Checa, tel. 5/269-0801).

A more unusual excursion is to the Chirije archaeological site, 15 kilometers south of the city. It can only be reached at low tide by driving along the beach, which adds to the adventure. Experts believe this was once an important port to the Bahía culture (500 b.c.–a.d. 500). Only small sections have been excavated, with artifacts on display in the small on-site museum. Tours (from $30 pp) can be arranged through Bahía Dolphin Tours (tel. 5/269-0257), which owns the site, or you can book through Ceibos or Guacamayo.

Getting There and Around

Bahía is an easy and pleasant city to walk around, but for weary legs and a little fun, try a tricyclo ride ($0.50). Drivers also offer a town tour ($2). Buses to destinations throughout the country leave from the new bus station south of town ($1.50 by taxi, or take a bus heading down the malecón). Coactur runs frequent buses to Manta (3 hours, $3) and Guayaquil (6 hours, $6). Reina del Camino runs three buses per day to Quito (8 hours, $9), Esmeraldas (8 hours, $8), Santo Domingo (4 hours, $4), and Guayaquil. To get to Canoa, take a ferry across the bay to San Vicente and get a bus from there, although with the completion of the new bridge, direct bus services will begin from the bus terminal.

The 10-minute passenger ferry (about 6 a.m.–11 p.m. daily, $0.30 pp) to San Vicente leaves from the dock at Malecón and Aguilera when full (usually every few minutes). 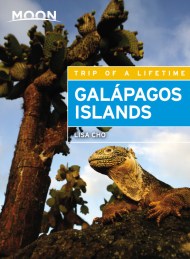 The Galápagos archipelago is one of the most beautiful, wild, and untouched places on earth.