In Vancouver, an active city bordering the mountains and the sea, begin your trip by strolling or cycling through a 1,000-acre (400-hectare) rainforest park and exploring diverse cultures, from the original aboriginal inhabitants to modern-day communities that reflect the city’s position on the Pacific Rim.

A 90-minute ferry ride across the Strait of Georgia, Victoria retains its British roots even as it has morphed into a contemporary city. It’s now known as much for its locally produced wine, beer, and spirits as for its tradition of afternoon tea. Beyond Victoria, opportunities abound for exploring Vancouver Island’s forests, waterways, and dramatic coastal regions.

Back on the mainland, the Sea-to-Sky Highway is one of Canada’s most beautiful short drives, winding along the coast between Vancouver and Whistler. North America’s largest winter sports mecca, Whistler is nearly as busy in spring, summer, and fall, with hikers, cyclists, and other adventurers exploring the peaks and lakes.

Travel east from Vancouver to the sunny Okanagan Valley, with its string of freshwater lakes, orchards, and Canada’s only desert—and more than 200 wineries lining its back roads.

From the Okanagan, head to the Rocky Mountains. The Trans-Canada Highway passes through several of British Columbia’s mountain national parks, including Mount Revelstoke, Glacier, Yoho, and Kootenay, each more dramatic than the last.

Just across the provincial border in Alberta are the marquee destinations of any western Canada road trip: Banff, Lake Louise, and Jasper. The region’s best scenic drive takes you along the Icefields Parkway, with its incredibly blue lakes and the largest area of glacial ice in the Canadian Rockies.

Once you’ve had your fill of hiking, rafting, and savoring the mountain vistas, continue on to the gateway city of Calgary, which not only hosts Canada’s biggest annual cowboy party but also offers distinctive museums and a pretty riverfront promenade. Or follow the southern route back toward Vancouver, exploring the Kootenays’ funky mountain towns and detouring along B.C.’s Hot Springs Highway.

From the ocean to the mountains, there’s plenty to experience, taste, and enjoy. Let’s hit the road.

High season in Vancouver and the Canadian Rockies runs from May through October, when most attractions and roads are open and the weather is generally warm and sunny. July and August are the region’s peak travel months, with the sunny, temperate conditions balancing out the big crowds and high prices.

Ask the locals about the best time to visit the Canadian Rockies, though, and everyone will say September. The summer crowds begin to abate, the weather is still mild, and the trees take on their fall colors. Temperatures can remain pleasant into October, though the nights get colder, and snow frequently begins in late October or early November.

While the long days and fewer tourists make May and June a reasonable alternative for a Rockies trip, prepare for more rain than in the summer. You might have occasional damp days on the coast, but the Rockies can be hit with a “June monsoon” when the rain turns heavy. These showers bring spring flowers, so pack a raincoat and get outdoors anyway.

Winter is mild in Vancouver and Victoria; rain is common from November through March, but snow is unusual. As soon as you rise above coastal elevations, winter travelers should prepare for heavy snow. It snows a lot in the mountains of B.C. and in the Canadian Rockies, when severe weather can close highway mountain passes. Always check the forecast before you hit the road.

If you’re traveling in the summer, particularly in July and August, consider booking your hotel reservations in advance. Many of the national park campgrounds fill up early, so reserving a campsite for summer or holiday travel is also a smart idea. Car reservations are recommended on B.C. Ferries in the summer as well. 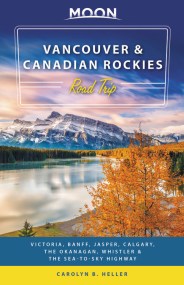 by Carolyn B. Heller

From the ocean to the mountains, Moon Vancouver & Canadian Rockies Road Trip will take you off the beaten path and into the heart of Western Canada.