Anchored along the Lake Superior shore in the northwest corner of Michigan’s Upper Peninsula, Porcupine Mountains Wilderness State Park (33303 Headquarters Rd., Ontonagon, 906/885-5275, annual Recreation Passport required, $11 Michigan residents, $31 nonresidents, day-use $9) covers 59,020 acres, the largest in Michigan’s excellent state park system. The Porcupine Mountains were considered for a national park in the 1940s and were quickly preserved as a state park in 1945 when loggers threatened their virgin timber before the federal government could take action.

Some years ago, the pitted and rugged landscape of low mountains and tall pines reminded locals of the silhouette of a porcupine. The name stuck, and today the area is endearingly dubbed “the Porkies.” It’s a destination for casual hikers and hard-core backpackers, with 90-plus miles of well-marked, well-maintained trails.

In this case, bigger also means better. The park preserves the largest tract of virgin hardwoods between the Rockies and Adirondacks and vast stands of virgin hemlock and pine, along with secluded lakes, wild rivers, and some of the Midwest’s highest peaks (Summit Peak tops out at 1,958 feet). The Porkies truly provide a sense of wilderness and serenity, an escape from the civilized world.

Hiking in the Porcupine Mountains

Many park visitors head immediately for the justly famous Lake of the Clouds Overlook. From the parking lot at the end of Highway 107, it’s just a few steps to the overlook, where the placid lake slices a long sliver of blue through a thick mat of jade forest hundreds of feet below. The view is the stuff postcards are made of and is probably the most photographed scene in the UP.

The overlook also serves as the trailhead for some the park’s most rugged and scenic routes. To properly soak in the Lake of the Clouds view, hike the aptly named Escarpment Trail, which winds east and skims over Cloud Peak and Cuyahoga Peak. Bordered by a sheer cliff, the four-mile trail is considered by many to be the most beautiful in the park. Allow ample time to stop and enjoy the shimmering lake and valley floor spreading out around you. If you’re fortunate enough to visit in the fall, the vista of color is beyond breathtaking.

Long before the Porcupine Mountains were preserved for their virgin timber and natural beauty, miners harvested the rich minerals buried in their bedrock. At the east end of the park, the Union Mine Trail provides a glimpse into the 1840s, when the Porkies pulsed with the excitement of the area’s copper rush. Marked with white mine shovels to indicate points of interest, this self-guided interpretive trail forms a one-mile loop along the spring-fed Union River and the site of an old copper mine, now largely swallowed by nature. In the shadow of lofty hemlocks, you’ll see how miners tunneled shafts into the riverbank, and learn about their life in the wilderness—still untamed today.

In winter, the park’s many hiking trails double as cross-country skiing trails. Be careful on the higher ones: On days when the strong north wind is blowing, you’ll feel the extreme cold.

Camping in the Porcupine Mountains Wilderness

Campers have their choice of two campgrounds ($14-25), both with a number of sites overlooking Lake Superior: Union Bay (with full hookups and modern restrooms), at the east end of the park, or rustic Presque Isle (no hookups), near the mouth of the Presque Isle River on the park’s western edge. In addition, three rustic campgrounds (called “outposts”) with three to eight sites each are located off the South Boundary Road, accessible by car, but with no facilities. They tend to offer more privacy than the regular campgrounds.

As another option, the park has 19 hike-in rustic cabins ($65). These are great retreats after a day on the trail. They come with two to eight bunks, mattresses, a woodstove, basic utensils, and protection from the elements, but no electricity or running water. Bring your own stove for cooking. Cabins situated on inland lakes even come with a rowboat, so you can finish the day with a lazy drift across the water. Three yurts ($60) and a lodge are also available. Reservations (800/447-2757) at any of these can be made as much as a year in advance.

Getting to the Porkies

Two roads lead to Porcupine Mountains Wilderness State Park, the headquarters of which lies about 58 miles northeast of Ironwood. From Wakefield, drive north on County Road 519, which leads to the park’s western edge and the Presque Isle River Area, a 17-mile trip that will take you about half an hour. From Bergland, reach the park headquarters via Highway 64 through Ottawa National Forest; arriving at Lake Superior, the road converges with Highway 107 near the park’s eastern boundary. Turn left onto Highway 107 toward the park headquarters, or continue toward the Lake of the Clouds Scenic Area; the 30-mile trip between Bergland and the park headquarters takes 40 minutes. South Boundary Road connects County Road 519 and Highway 64 along the southern edge of the park.

Start your visit at the park’s visitors center at the junction of Highway 107 and South Boundary Road. Rangers on duty can provide you with maps and suggest trails. A gift shop has topographic maps and a good selection of nature guidebooks. 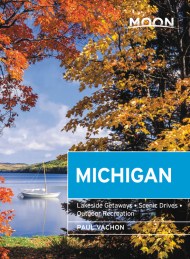