These free, printable travel maps of New Mexico are divided into seven regions:

Explore New Mexico with these helpful travel maps. Ensure you have the newest travel maps from Moon by ordering the most recent edition of our travel guides to New Mexico and its cities. 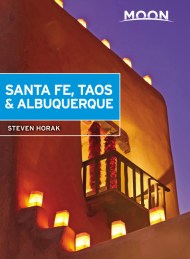 Whether you’re in search of hot peppers, boundary-pushing art, or a scenic mesa hike, explore the Land of Enchantment’s unique magic with Moon Travel Guides.

A modern Western city, Albuquerque sprawls over more than 100 square miles at the base of the Sandia Mountains. It’s proud of its Route 66 style, and it’s also preserving farmland along the Rio Grande and redesigning itself as a green city.

New Mexico’s picturesque capital has a human scale and a golden glow (partly from the loads of money spent here). Museums are a major draw—for state history, folk art, and more—as are the scores of galleries. Outside of town are the cliff dwellings at Bandelier National Monument; the scenery of Abiquiu, which inspired painter Georgia O’Keeffe; and Los Alamos, birthplace of the A-bomb.

Maps of Las Vegas and the Northeast

Past the Pecos Mountains, Las Vegas, a.k.a. Meadow City, is a well-preserved historic town, often used as a Western film set.

Maps of Navajo Nation and the Northwest

Stark volcanic landscape, lonesome roads, and tall mesas—this is some of the most dramatic desert terrain in the state, along with its oldest cultures. This quadrant (often called Four Corners, as it abuts three other states) is where the Ancestral Puebloans lived in Chaco Canyon, and where Gallup is the self-proclaimed American Indian capital.

Maps of Las Cruces and the Southwest

This corner of the state has both the rugged Gila Wilderness and the mesmerizing Chihuahuan Desert. It’s a long drive between the river-fed farmland around Las Cruces and colorful, artsy Silver City, tucked in the mountains, but worth it—especially for the food-focused, who will find a number of excellent restaurants. Truth or Consequences reels in the curious, delivering hot springs and quirkiness.

Maps of Carlsbad Caverns and the Southeast

Most visitors make a beeline to the amazing natural wonders of White Sands National Monument and Carlsbad Caverns National Park. On the way, you can track outlaw Billy the Kid, who dueled in the mountain town of Lincoln, now an excellent outdoor museum.

Exploring more of the Southwest? Check out our road trip guides covering parts of New Mexico: 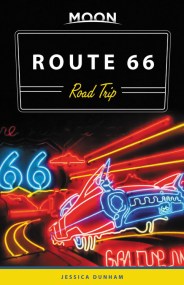 Moon Route 66 Road Trip reveals the best of this iconic highway, from sweeping prairies and red rock mountains to the glittering Pacific. 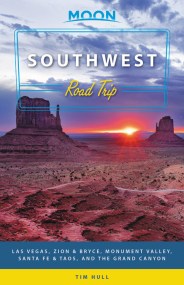