These free, printable travel maps of Minnesota are divided into seven regions:

Explore the Minnesota with these printable travel maps. Ensure you have the newest travel maps from Moon by ordering the most recent edition of our travel guides to Minnesota and the Twin Cities. 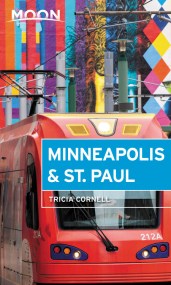 Bustling, modern, and hip, the Twin Cities are far from hibernating. See what makes them shine year-round.

With four internationally known art museums, three Tony Award-winning theaters, and a full slate of festivals year-round, Minneapolis is one of the country’s most cultured cities, while quiet St. Paul, where the primary attractions are its historic buildings, is one of its most stately. Together the pair makes an easily navigable and satisfying urban destination.

Some people, in their rush to get “Up North,” drive through this region and never know what they’re missing: postcard-perfect towns like Marine on St. Croix and Stillwater, and gorgeous gorges in the state parks to the north.

The northeast corner has more than its fair share of Minnesota’s best and most beautiful, starting with the port city of Duluth. Minnesotans themselves named the stunning views along the North Shore of Lake Superior among 150 iconic state treasures.

Minnesota’s lake country, much of it covered by the 1,042-square-mile Chippewa National Forest, is the most popular family vacation destination for Minnesotans.

The farm fields of the Red River Valley stretch seemingly forever, broken only by scattered small towns and parks, including the wonderful Agassiz National Wildlife Refuge. Unheralded Moorhead is home to the Scandinavian-focused Historical and Cultural Society of Clay County, and nearby is Buffalo River State Park, with one of the largest and healthiest remaining prairies.

While southwest Minnesota is mostly farm country—broken by the deep, tree-lined Minnesota River Valley—it has a surprisingly varied assortment of attractions, including the sacred (Pipestone National Monument and Jeffers Petroglyphs) and the weird (Belle Plaine’s two-story outhouse). Fans trek to Walnut Grove, home of Laura Ingalls Wilder, and a few scattered patches of prairie remain, most notably at Blue Mounds State Park.

In southeast Minnesota, steep bluffs rise as much as 500 feet over the Mississippi River, which widens to form the stunning Lake Pepin, a popular summer playground for water buffs. Glimpses of the river’s shipping heyday live on in picturesque towns like Red Wing and Winona, and farther inland, in Amish Country, pleasant villages like Lanesboro and Harmony harken back to a simpler time.