These free, printable travel maps of Israel & the West Bank are divided into seven regions:

Explore Israel, Tel Aviv, and Jerusalem with these helpful travel maps. Ensure you have the newest travel maps from Moon by ordering the most recent edition of our travel guide to Israel & the West Bank. 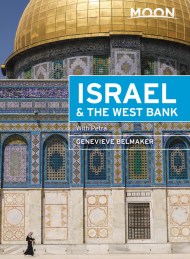 Ancient stories meet modern cities in this deeply significant region where the past is always present.

The Galilee and the Golan Heights

The north of Israel encompasses the Upper Galilee, the Lower Galilee and the Golan Heights, home to some of the most gorgeous parks and nature reserves and best hiking and camping opportunities in the region.

Haifa and the North Coast

Once you’re in Haifa, Israel’s third-largest city and situated on the coast north of Tel Aviv, you can easily jump off to other charming coastal towns and nearby historical and religious sites, such as Akko, Caesarea, and Zichron Ya’akov, with minimal hassle. The life of Haifa, the only city in Israel with any public transportation on the weekend, revolves around the dominating Baha’i Gardens and Golden Dome. You can spend days just going between exploring Haifa’s museums, restaurants, and beaches and then wandering through the serene and pristine grounds of the Baha’i Gardens.

Though not on every traveler’s list, the West Bank is home to some important historic and religious sites, including the towns of Bethlehem, Jericho, and Hebron. The Arab city of Ramallah, just a short drive from Jerusalem, is the hub of Arab arts and culture in the West Bank, and is known for the important cultural festivals it puts on every year.

The first modern Jewish city, Tel Aviv isn’t called the “center” for nothing, with a dizzying offering of restaurants, clubs, museums, performing arts venues of all sizes, nightlife, music, beaches, surfing, and outdoor sports. It is a place known for its openly accepting atmosphere of all kinds of people, a high-powered technical and business sector, and the heart of the country’s famed diamond industry. Tel Aviv’s world-class parks and recreation offerings are at the heart of its many summer festivals, events, and live concerts. It is, by far and away, the most popular place in Israel to party and just enjoy life.

Jerusalem seems older than time itself and is enthralling with its dozens of archaeological, religious, and historical sites and museums. When you tire of tours and history lessons, it is just as interesting to stroll through the unique districts of the city, such as the German Colony, with its interesting gardens, homes, shops, buildings, and people, and stop for a world-class meal in one of the city’s many restaurants. A classic destination for religious pilgrimage, Jerusalem also has a lively arts scene and decent nightlife offerings.

Eilat and the Negev

Home to the Negev Desert, which makes up more than half of Israel’s land mass, the south is considered by many to be wild and untamed in many ways. A popular destination for desert ecotourism, the Negev is the perfect place to experience camping out under the stars and discovering the unique beauty of the desert on long hikes. Home to the Dead Sea, the lowest point on Earth, the south is sparsely populated, but boasts the thriving tourist hub of Eilat at its far south end. Eilat has some of the best coral diving in the world, tax-free shopping, and it is the gateway to Petra, Jordan.

No experience can compare to seeing the ancient Nabataean city of Petra with your own eyes. Once the capital city of powerful and wealthy spice route merchants, modern Petra is a massive archaeological site that takes several days to explore thoroughly. Replete with hikes of varying lengths that end at gorgeous archaeological sites, Petra can be experienced in tandem with the immediately-adjacent, charming Arab village Wadi Musa, with its many offerings of Bedouin food and hospitality.